What’s the Coolest Place in the Universe?

It’s easy to guess where the hottest place in the universe might be — the core of a giant star, maybe, or a disk of gas heated to millions of degrees as it tries to cram its way into a super-massive black hole, or even, for a fraction of a second, a fusion reactor in New Jersey. It’s harder to imagine the coldest place, though.

Everyone knows that space is cold. In the vast gulf between stars and galaxies, the temperature of gaseous matter routinely drops to 3 degrees K, or 454 degrees below zero Fahrenheit.

You might think that the thermometer drops as far as it can go in the vast empty darkness between stars. But you’d be wrong. How about between galaxies? Wrong again.

A ghostly nebula shining about 5,000 light-years from Earth is also the coldest known object in the universe.

The dead star creating the Boomerang Nebula is sloughing off gas from its shell, which is producing the strangely shaped cosmic object, astronomers have discovered. The gas is cooling as it flows away from the white dwarf star in a process similar to how refrigerators stay cold by using expanding gas. 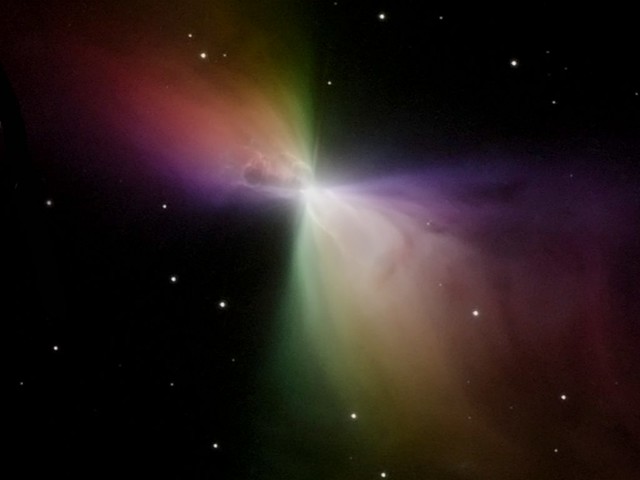 Astronomers using the Atacama Large Millimeter/submillimeter Array (ALMA) telescope have taken a new look at this intriguing object to learn more about its frigid properties and determine its true shape, which has an eerily ghost-like appearance.

As originally observed with ground-based telescopes, this nebula appeared lopsided, which is how it got its name. Later observations with the Hubble Space Telescope revealed a bow-tie-like structure.

The new ALMA data, however, reveal that the Hubble image tells only part of the story, and the twin lobes seen in that image may actually be a trick of the light as seen at visible wavelengths.

“This ultra-cold object is extremely intriguing and we’re learning much more about its true nature with ALMA,” said Raghvendra Sahai, a researcher and principal scientist at NASA’s Jet Propulsion Laboratory in Pasadena, California, and lead author of a paper published in the Astrophysical Journal.

The Boomerang Nebula is considered a young planetary nebula, or an object that is formed when a dying star — one that was similar to the sun — sheds its outer layers and leaves a cloud of gas behind. This kind of star burns like the sun for billions of years before growing into a red giant, running out of gas and then fading into a white dwarf.

In later stages of planetary nebula evolution, the white dwarf in the middle sends out ultraviolet radiation that makes the gas glow, producing bright colors within the gas. The Boomerang Nebula, however, is not quite at that stage, researchers said. It’s visible right now because the star’s light is being reflected off the dust grains.

The outflow of gas from this particular star is expanding rapidly and cooling itself in the process. This is similar in principle to the way refrigerators use expanding gas to produce cold temperatures. The researchers were able to take the temperature of the gas in the nebula by seeing how it absorbed the cosmic microwave background radiation, which has a very uniform temperature of 2.8 degrees Kelvin (minus 455 degrees Fahrenheit).

The new research also indicated that the outer fringes of the nebula are beginning to warm, even though they are still slightly colder than the cosmic microwave background. This warming may be due to the photoelectric effect — an effect first proposed by Einstein in which light is absorbed by solid material, which then re-emits electrons.

“This is important for the understanding of how stars die and become planetary nebulae [nebulas],” Sahai said. “Using ALMA, we were quite literally and figuratively able to shed new light on the death throes of a sun-like star.”