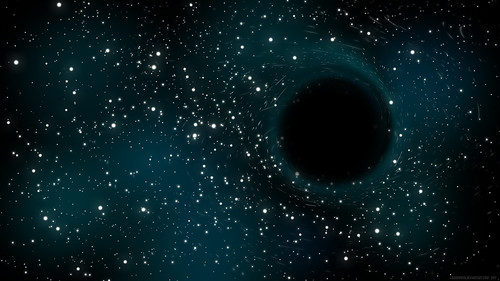 Such a region of space has a dramatic effect on time, slowing it down far more than anything else in the galaxy. That makes it a natural time machine! I like to imagine, how a spaceship might someday be able to take advantage of this spectacular phenomenon. We all are fascinated by the concept of ‘time machine’.

To analyze this, and to take advantage of this natural time machine, a spaceship was sent by a space agency, to orbit around it with a circle of 30 million miles in diameter. The spaceship was made to orbit around a safe boundary, and with a certain speed, that would escape it from not getting sucked in by the deadly massive black void in the space.

The space agency that took control of the spaceship, was far away from the region and they observed that, each full orbit took 16 minutes.

But for the brave people on board, close to this region of space, time would be slowed down by half. For every 16 minutes orbit, they had only experienced 8 minutes of time.

Imagine, they circle it for 5 years, but 10 years would pass somewhere else! When the crew of the spacecraft would return to the future earth, they would have made a journey not only in space, but in time.

“The most spectacular aspect of our 16-year study, is that it has delivered what is now considered to be the best empirical evidence that supermassive black holes do exist” – these were the words of Professor Reinhard Genzel from the University of California, Berkeley, and also Head of the research team, which confirmed that there is one in the center of our milky way galaxy.

Our universe is endless and exploring it every time changes the views and ideas of scientists like the way, black holes did. The universe is really a wonder and still a puzzle to our astronomers. Studying about them is one of the interesting things in astronomy because of its obscure and powerful nature. Some scientists, even today, say that such a region of space still remains a mystery to them.