What Are Dwarf Galaxies Teaching Us About Black Holes?

Over the past decade, we have come to appreciate that essentially every normal galaxy, including our Milky Way, harbors a supermassive black hole at its center. These monsters play an important role in the evolution of galaxies and the appearance of the observable universe, but their origin is largely unknown.

While its only found signatures of “active” black holes in a tiny fraction of these dwarf galaxies, the search technique is only sensitive to the brightest and most actively feeding ones. So there are likely many more supermassive black holes hiding out in dwarf galaxies.

Dwarf galaxy Henize 2-10 as seen in a composite image comprised of data from radio, optical, and X-ray images. The discovery of a 1 million solar mass black hole in the center of this galaxy triggered the hunt for similar black holes in other dwarf galaxies. Click to zoom

The ongoing complementary studies using radio and X-ray observations are already starting to unveil these hidden black holes. Ultimately, searching for and studying supermassive black holes in dwarf galaxies will provide important clues to the puzzling question: How did supermassive black holes that reside in the center of nearly every full-sized galaxy get started in the first place? 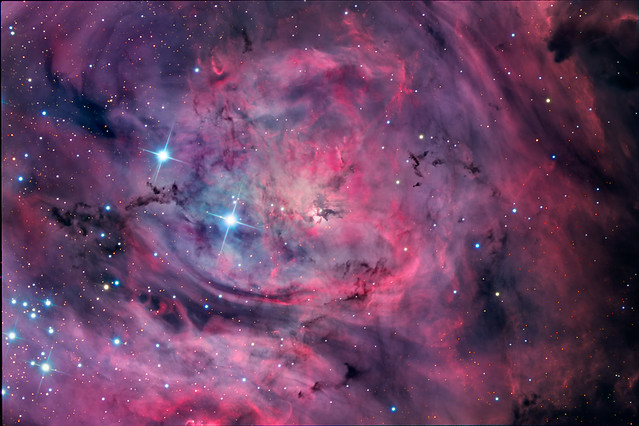 Although the spiral arms of the Milky Way harbor many impressive clouds of gas and dust, few rival the Lagoon Nebula (M8) in Sagittarius the Archer.

During the past few million years, the Lagoon has spawned thousands of stars as dense pockets of gas collapsed under their own weight.

The hottest of these suns excite the surrounding hydrogen atoms and cause them to glow with a characteristic reddish color. M8 spans approximately 100 lightyears and lies roughly 5,000 light-years from Earth.
Astronomers captured this image with the 2.6-meter VLT Survey Telescope on Cerro Paranal in northern.