Weird Moons of the Solar System

Moons in our solar system get little respect. The latest discoveries from planets like Mars and Saturn grab headlines. New comets invade the public consciousness. Meteors dazzle skygazers, and little Pluto attracts a fan club. Moons, in comparison, seem boring. The sheer number of these natural satellites in our solar system makes them overwhelming to study.

From afar, the moons look like cratered, gray rocks frozen in time and space. As astronomers look closer with more sophisticated telescopes and unmanned spacecraft, however, they are beginning to discover these objects’ unique and colorful identities.

Many of our solar system’s moons are surprisingly dynamic worlds with ongoing geologic activity. Volcanoes blow their tops, liquids flow, and geysers erupt. These objects experience rock tides and display cliff faces like nothing on Earth. Many moons present the scars of violent pasts. They are peculiar places that not only interact with their parent planets but also shake up other moons and disturb rings. 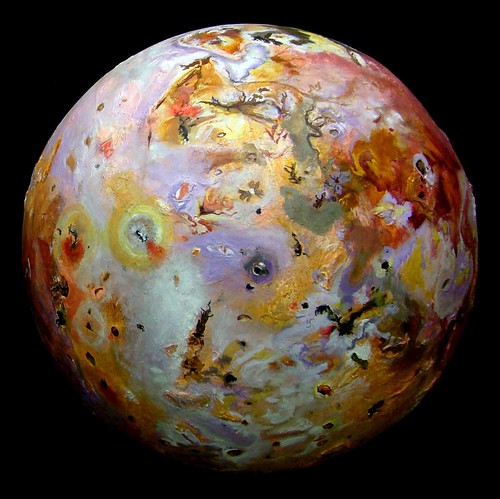 With 67 moons and counting, Jupiter is a solar system in miniature, full of many weird worlds to explore. But two of its moons excite the imaginations of science enthusiasts like no others: Io and Europa.

Io is the most volcanic world in the solar system. Slightly larger than our Moon, the world fosters multiple erupting volcanoes on a daily basis, some of which shoot plumes of lava 250 miles (400 kilometers) above the surface. Vast lakes and rivers of dark magma flow while a caldera named Loki emits more heat than all the volcanoes on Earth combined.

Why so hot? Io is caught in a cosmic tug-of-war between gigantic Jupiter on one side and large jovian moons (Europa and Ganymede) on the other. The varying gravitational pulls stretch Io like a rubber band. On Earth, we experience ocean tides from the Moon’s gravity. On Io, there is a ground swell.

The stretching of all that rock produces heat, which melts a layer not far below the moon’s crust that then bursts out of volcanoes that pepper its surface. Io is literally turning itself inside out.

The satellite’s rapidly changing terrain presents a challenge for mapmakers. In April 1997, the Galileo spacecraft imaged Pele, Io’s most distinctive volcano, and its ring of bright orange sulfur deposits 870 miles (1,400km) in diameter. On a subsequent flyby five months later, a mountain the size of Arizona had materialized on Pele’s flank. 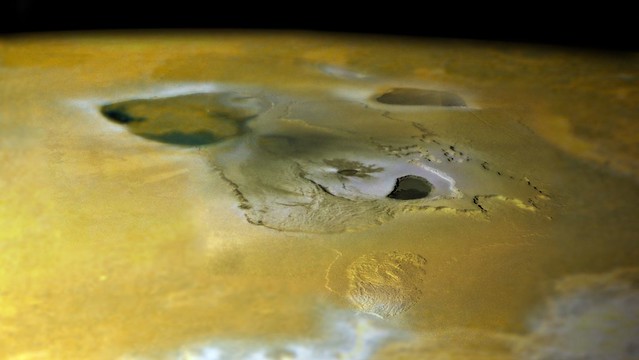 Since Galileo’s exploration, Jupiter and its moons also entertained a visit in 2007 by the New Horizons mission en route to Pluto. John Spencer and his team from the Jupiter Encounter Science Team at the Southwest Research Institute (SwRI) analyzed New Horizons data to discover an explosive blast that reshaped the surface of Io around the Tvashtar volcano.

Ground-based telescopes also can see volcanic activity on Io. Imke de Pater from the University of California, Berkeley, using the Keck II Telescope in Hawaii to look at Io in 2013, measured one of the 10 biggest eruptions ever witnessed in the solar system. Who knows what the next Jupiter mission, the Juno spacecraft, will find on Io when it arrives in 2016?

Artistic ilustration of the surface of IO 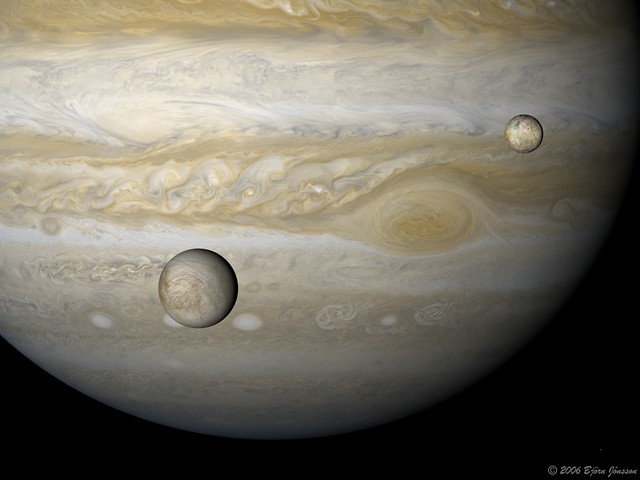 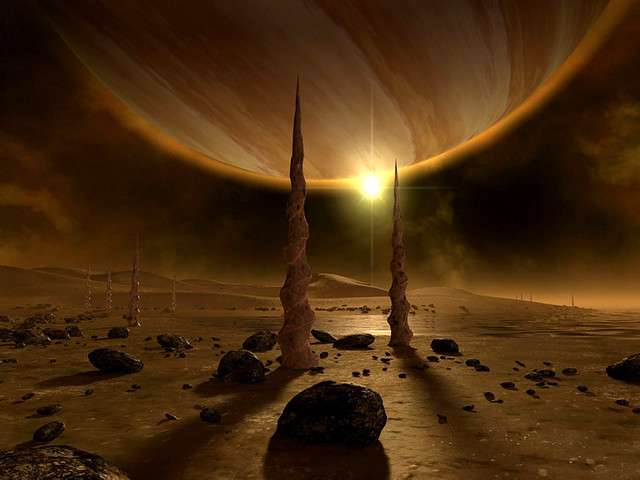