We Know How The Universe Began But Can We Figure Out When It’ll End?

We have a pretty good idea of how and when the universe began as for how it’s going to end, hmm?

The Big Bang Theory is more than just a TV show, it’s our best explanation for how the universe as we know it started.

When Edwin Hubble looked at the night sky in 1923, he discovered that the universe was much bigger than just our Milky Way, there were actually billions of galaxies all over the place. Then in 1929, Hubble also notice that the majority of galaxies are speeding away from us. Logically then, if you go backwards in time, everything must have been smashed together in a singularity at some point, and I mean that, both physically and temporarily with all that phenomenal cosmic power, it blew right up in the greatest fireworks display of the last 13.8 billion years. As you can imagine, this discovery was a game-changer.

Einstein equations on general relativity from 1917 should have mathematically predicted an expanding or a contracting universe but the method had been intentionally fudged by scientists who didn’t want to believe the universe wasn’t static (Einstein himself called his creation the greatest blunder of his career and as a result it has been doomed to obscurity).

So, if the universe has a beginning then what does that mean for how it will end? where is this all going? well, that’s a little tougher to crack. At first, it was thought there were two possibilities, if the universe has enough stuff in it, gravity slows the expansion and eventually it will collapse into a singularity and maybe even another big bang (this is elegant and beautiful and makes wonderful satisfying sense). Unfortunately, the universe is under no obligation to make sense to you.

The other possibility is happening, the universe isn’t just expanding its accelerating. What’s driving the acceleration? what is making space itself expand like the surface of inflating a balloon? we have no idea. Our best guess is some as-yet unexplained source of energy known as dark energy.

So, if everything keeps going the way it is, it looks like the universe could expand and exist forever. Whether life can exist forever is a different story. Our Sun will exhaust its fuel in about 5 billion years while much smaller red dwarfs will use their fuel in trillions of years — that is an incomprehensibly long time but that time will come nonetheless. Meanwhile, black holes will still be doing stuff, radiating particles back into the void, but even supermassive black holes will dissipate after google’s of years. Eventually, entropy will spread energy uniformly across the universe and it just won’t be possible to do literally anything, so life as we know it is kaput, this is called the heat death of the universe or the big freeze and it looks like we’re headed in that way.

An international team of astronomers just study the energy output from 200,000 galaxies and discovered its half of what it was just two billion years ago. We’re apparently in the midst of a steep decline but eventually it will slow down as only the biggest black holes are left petering out. That is one way the universe could end, not with a bang but with a whimper. 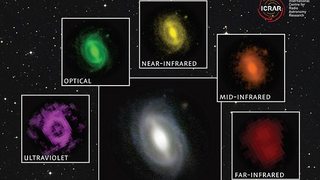 Galaxies as charted by astronomers. ©ICRAR/GAMA and ESO. Click to zoom

But we don’t know enough about dark energy to assume it’s going to keep acting the way it does, maybe it’ll slow or even reverse and will get a big crunch or a cyclical universe or maybe everything he even Atoms themselves will get ripped to shred.

Rumor I said, dark energy is making space itself expand, things are just moving away from us, space itself is growing, it stretches in about 70.4 kilometers per second per magaparsec which means that if you had 2 object a magaparsec a part with no velocities relative to each other, every second they would get 70.4 kilometers farther away. A megaparsec is a 3.3 million light years though, so it’s a very tiny inflation over smaller distances. Other forces like gravity or the strong nuclear force means the expansion of space doesn’t affect atoms or solid objects.

Dark energy could become more dense though, and given long enough, the stars, planets even atoms could be ripped apart, this is called the big trip. As you can tell, dark matter is the linchpin of these two theories and there’s still more possibilities one of them cosmic uncertainty — essentially, throws your hands in the air and says we don’t know what will happen until we understand dark energy.

So, clearly figuring out this stuff will tell us a lot about our future, well maybe not our future, you and I will be long gone by the time, any of these scenarios would play out and the human race itself may have vanished or evolve into something unrecognizable. Sadly nobody lives to see the future but it’s going to be a really interesting place.

So, that covers many of the prevailing ideas on how the universe will end, but what happens when you end?

Thanks for your interest! Where do you think the universe is going? let us know in the .

Featured image: ©2015 ReFiend.
© Content from this site must be hyperlinked when used.