Over the past two decades, the study of exoplanets has grown more rapidly than any other field of astronomy.

Hundreds of researchers across our globe now work to find new planets, measure their sizes and masses, characterize planetary orbits and more. Whenever our instruments, facilities and observing techniques become available, our insights into exoplanets dramatically advance.

Today, our best astronomical assets for hunting planets is NASA’ Kepler Space telescope, a space probe launched by NASA in 2009 to discover Earth-size planets beyond our solar system. Kepler found more than 4500 planets candidate and confirmed more than 1000 planets and the tally is rising rapidly.

From super-Earths to giants hot/cold Jupiters even rogue planets that sail free, our galaxy is a zoo of different kinds of worlds. As we’re progressing on that path, we accomplish fantastic new results. Though, we think we’ve seen it all, the universe can still surprise us. Astronomers hunting for exoplanets just stumbleupon something extremely rare, something that we haven’t seen before.

In a distant place in our galaxy, 1600 light years away from Earth, there’s a binary system composed not by stars but by failed stars. Two brown dwarf stars, low-mass stars with masses 0.2 M (solar masses) and ∼ 0.1 M located at a distance of 1.7 AU between them, reside there.

Brown dwarfs occupy a niche in between stars and planets — massive objects too big to be planets and too small to fuse hydrogen and become stars.

Brown dwarfs are intermediate in mass between stars and planets, making them important laboratories for testing theories about both classes of objects. They are also potentially a laboratory to test theories of planet formation, as recent studies show. 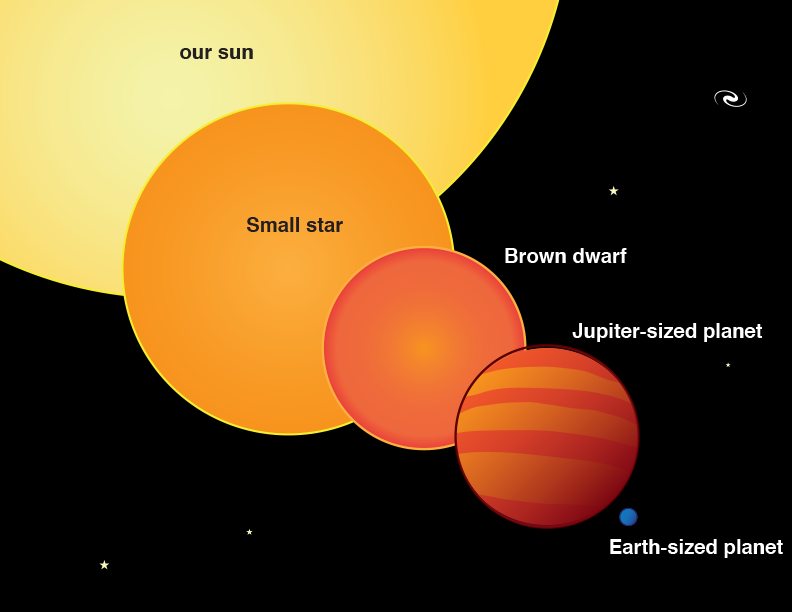 Brown dwarf in correlation with stars and planets ©spaceplace.nasa.gov

We talk a little about these mysterious class of objects, but the discovery of a binary brown dwarf stars is not the strange part of this article: researchers have now found a planet orbiting the smaller brown dwarf of the binary system.

Detecting planets that orbit brown dwarfs is really challenging. Brown dwarfs are low-luminosity objects, almost complete absence of light. There so dim and difficult to see that’s a really surprising thing to find a planet orbiting them.

With present technology, substantially lower-mass companions to brown dwarfs, composed primarily of ice and rock, can only be discovered using the gravitational microlensing technique. Microlensing does not rely on light from either the host or planet, but rather infers the existence and properties of these bodies from their deflection and magnification of light from a more distant star that is fortuitously aligned with the system. With this technique, only 4 super-Jupiter planets orbiting brown dwarfs have been detected to date.

It is extremely difficult—although probably not impossible—to see planets around brown dwarfs by any technique except microlensing,

In the case of a brown dwarf, even though it’s emitting little or no light, [microlensing] can still betray its presence. 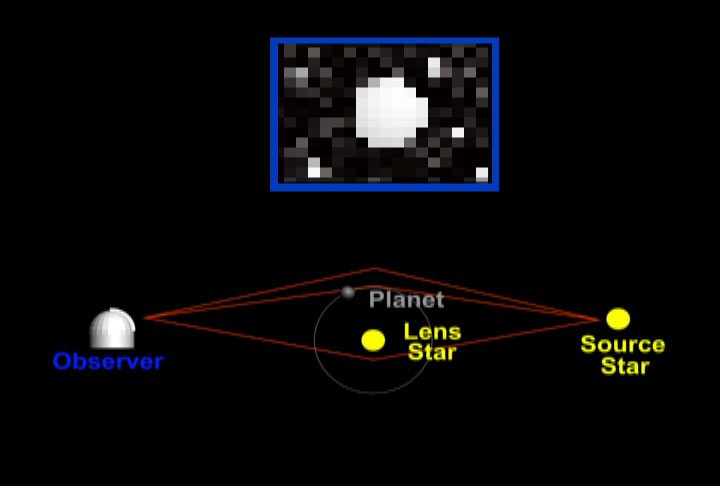 The principles of microlensing explained ©NASA/JPL-Caltech.

In a study published online on 13 Jul 2015, astronomers using a gravitational microlensing technique have found a Venus-mass planet orbiting the brown dwarf. A rocky planet orbiting a failed star has never been observed before. So, the discovery was really first of its kind.

We think that we’re really just scratching the surface of what microlensing can tell us about systems people aren’t even really thinking about right now,

We’re looking forward in the future to more microlensing detections.

Venus-mass planet or a star?

The discovery of OGLE-2013-BLG-0723B was of special scientific interest in many aspects. First, the planet itself is the lowest-mass planet among those discovered by using the microlensing method.

Second, the host of the planet is a substellar-mass brown dwarf suggesting the possibility that an ice-rock planets can be formed in the outer parts of the accretion disk around a brown dwarf.

Third, the planet belongs to a binary system where the planet orbits the lower-mass component of the binary.

Finally, the planet/host mass ratio indicates that the system may be viewed either as a scaled-down version of a planet plus a star or as a scaled-up version of a moon plus a planet orbiting a star, suggesting that the formation processes of companions within accretion disks around stars, brown dwarfs, and planets are similar.

Based on statistical evidence, that rocky planets around low-mass stellar pairs like this one are likely quite common, enough so that every star in a similar system may boast a terrestrial world. A small portion of those found in the future may well be warm enough to hold liquid water on their surface, and as microlensing surveys improve and space-based efforts continue, more of these worlds should be identified.

But this isn’t the end of the story. Today, in a paper uploaded on arxiv servers, researchers could demolish the venus-mass planet hypothesis.

In this work, we present another interpretation of the lensing event OGLE-2013-BLG-0723 based on a new solution of lensing parameters found from the reanalysis of the event.

From this, we find a new solution where the lens is composed of 2 bodies in contrast to the 3-body solution of the previous analysis.

Researchers suggest that the lens system is actually composed of two low-mass stars with ∼ 0.2 M (solar masses) and ∼ 0.1 M.

So is it a venus-mass planet or just two low-mass stars?

Bottom line: Microlensing event OGLE-2013-BLG-0723 was discovered by the Optical Gravitational Lensing Experiment (OGLE-IV) on May 12, 2013 using its 1.3m Warsaw telescope at the Las Campanas Observatory in Chile.