V774104: Most Distant Object In The Solar System Identified

Think Pluto is far away? Think again! Researchers have just discovered an icy world — designated V774104 — a ‘Mini-Pluto’ which is about 103 times farther away from the sun than Earth. V774104 is three times farther away than Pluto is, a new record for the most distant object ever seen in the solar system. The record for the ‘most distant object in the solar system’ was previously held by the dwarf planet Eris, which is 97 AU from the Sun — 1 AU is the distance between Earth and the sun.

Did You Know: Eris was first observed in 2003 by a team of astronomers led by Mike Brown and barely confirmed in January 2005, being designated as the known most distant object of the solar system. Its located well beyond the Kuiper Belt, a home to Pluto and thousands of other icy bodies, a region that stretches from the orbit of Neptune out to about 50 UA from the sun.

By using the Subaru telescope in Hawaii, astronomer Scott Sheppard and his colleagues discovered the object while observing the solar system hunting for faint, distant objects, orbiting the sun. They announced their finding at a 47th annual meeting of the American Astronomical Society’s Division for Planetary Sciences, taking place in National Harbor near Washington DC.

V774104 is believe to be between 500 km and 1000 km across and it’s probably made of ice. It currently sits 15.4 billion kilometers from the Sun. This extreme remoteness suggests that the body could be important — its orbit remained undisturbed for billions of years. But what is that mean?

We can’t really classify the object yet, as we don’t know its orbit. We only just found this object a few weeks ago.

It could end up joining an emerging class of extreme solar system objects whose strange orbits point to the hypothetical influence of rogue planets or nearby stars. 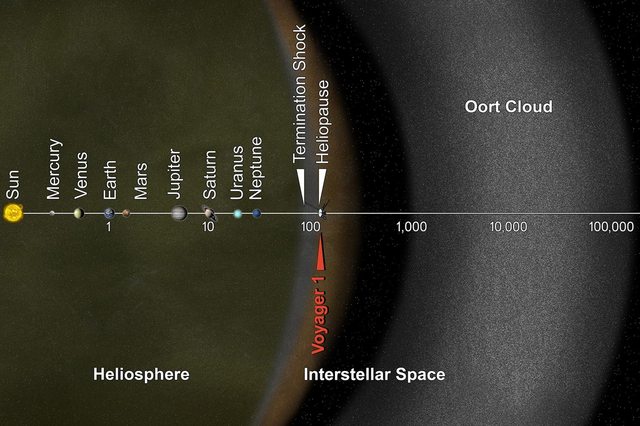 Inner Oort cloud objects are speculated to orbit up to 1000 A &copy:NASA / JPL-Caltech.
Click to zoom

This discovery gives us a rare glimpse into the periphery of the solar system. The mysterious object could be one of thousands of distant objects that are thought to form what is known as the Oort cloud (a sphere of icy objects surrounding our solar system). To date, only two ‘worlds’ are known to lie in the inner Oort cloud: an object called Sedna and another known as 2012 VP113, popularly nicknamed ‘Biden’.

Sedna never comes closer to the Sun than 76 AU; VP113’s approach is 80 AU. If the newfound world never come close to the sun as far as 103 AU it will join the other two scientifically fascinating objects residing in the inner Oort cloud.

If it never gets closer to the sun than its current location, it would be classified as an Oort Cloud object as it is well beyond the Kuiper Belt. But if its orbit brings it to within 50 AU of the sun at some point, it would be considered a scattered Kuiper Belt object, that is an object that likely scattered off of Neptune sometime in the distant past,

What makes the inner Oort cloud objects interesting is that their eccentric orbits cannot be explained by the known structure of the solar system: something else had to perturb their orbits,

Possible explanations include an unseen giant planet that still orbits in the deep or one that was ejected from the solar system, disturbing inner Oort cloud objects on its way out.

The researchers plan to look again next week using the Magellan telescopes in Chile and in a year, to determine its orbit and learn if this is a true resident of the inner Oort cloud.

We don’t know of any other objects that are this far away from the sun,

This can help us understand how the outer solar system was formed.

Bottom line: V774104 isn’t alone in the discovery, however. The team of astronomers also discovered about a dozen other objects, with distances ranging from 80 to 90 AU. They travel more slowly so the gathering of data about them is also slower. There is a possibility they can get thrown out of the solar system if they venture too near Neptune, but scientists hope they will stay to keep our planets company in the Oort cloud. Reported New Scientist.