Uranus: Facts About the Planet Uranus

From its planetary rings to the clear lack of exploration, we countdown the most interesting facts about… the planet Uranus.

Uranus: An icy gas giant planet, is the seventh planet from the sun. Due to their similar chemical compositions, Neptune and Uranus are considered to be siblings. However, it is smaller in size than Neptune and is the third largest planet in our solar system.

The planet cannot be seen with the unaided eye and it was the first planet to be discovered via a telescope by William Herschel on March 13, 1781. It’s said to be spinning like a top around the sun because of its unusual axial tilt. Furthermore, it is the only planet which is named after a figure from Greek mythology ‘Uranus’, the god of sky and deity of the heavens.

Planetary Rings: If you think only Saturn has planetary rings then you are wrong! The first nine rings of Uranus were discovered in 1977 by astronomers James L. Elliot, Edward W. Dunham, and Jessica Mink by sheer luck. While William Herschel had mentioned the presence of the rings, their existence was never confirmed. The astronomers were actually studying its atmosphere when they noticed the rings. The images of the rings were obtained when Voyager 2 spacecraft passed through the Uranus system in the year of 1986. Afterwards, additional rings were also discovered along with natural satellites revolving around the planet.

The sideways planet: The magnetic field is certainly odd. Instead of being centrally focused, it is lopsided. It is tilted 59° away from the planet’s spin axis of rotation. Scientists have put forward a theory that a mega collision with an Earth-like celestial body might have caused the unique tilt.

Moons of Uranus: Uranus has 27 confirmed moons. Out of 27, only five moons are large in size. They are Titania, Oberon, Umbriel, Ariel and Miranda. Actually, the names are inspired from the works of Shakespeare and Alexander Pope.

Pop Culture: Don’t embarrass yourself in public and learn to pronounce Uranus the right way. It is pronounced as ‘yoor-a-nus’. Moving on, it is the ruling planet of Aquarius. The planet is often associated with electricity because of its cyan color. The electric blue and green hues come from the high quantity of methane in its atmosphere. The chemical element ‘uranium’, a heavy metal, is also named after the planet which was discovered by the German chemist Martin Heinrich in 1789. 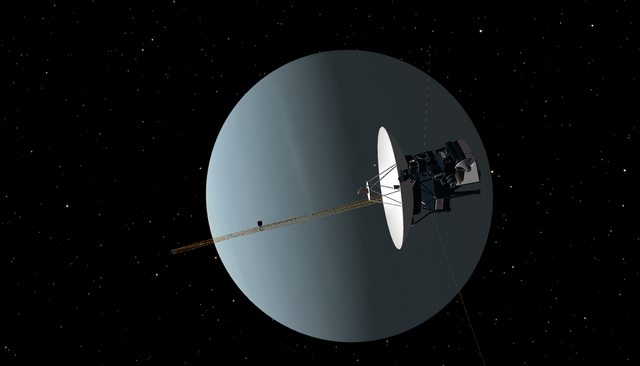 Exploration: Sadly, Uranus has not been thoroughly explored. Till now, it has been explored only through telescopes and NASA’s Voyager 2 spacecraft sent in 1986. Voyager 2 managed to discover ten of its moons, observed the planet’s icy atmosphere, scanned its planetary ring system, and discovering two new additional rings! Several missions to explore the planet have been presented, but none of them have been approved yet.

The Cold Climate: The climate of Uranus is very cold. Because Pluto has been kicked out from the solar system, it has become the coldest planet in the entire solar system even though it is not the farthest from the sun. The planet suffers from extreme seasonal variation thanks to its complete lack of internal heat and axial tilt. It has bands of clouds, mighty winds and an icy surface. The temperature can go as low as 49K (−224.2°C)… that’s cold!

The ‘Ice Giant’: Uranus is known as the ‘ice giant’. Like other gas giants, its upper layer has high concentration of hydrogen and helium. However, its rocky core of iron is surrounded by a mantle of ice. Scientists also think that it is hiding an ocean of water under its gassy atmosphere and icy surface. Moreover, its upper atmosphere has ice crystals, methane, ammonia and water that give the planets its famous cyan color.

How far is Uranus? Have you ever wanted to travel to Uranus? Well, it will take you approximately 160 light minutes. As both Earth and Uranus orbit around the sun, the distance between them continues to change. The nearest Uranus can ever get to Earth is 2.57 billion km. So, What did you guys find interesting in this one?﻿