Unbelievable Natural Phenomena You Have To See

Our planet is amazing. Weird and wonderful things happen every day. Meteor showers, fire rainbows, and strange-looking clouds are just some of these awesome things you might be lucky enough to get a glimpse of someday, but the following phenomena top them all. 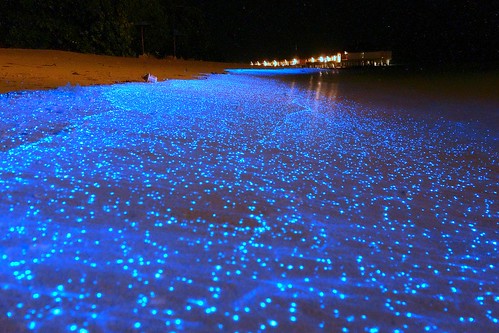 Recently, a beach in the Maldives started glowing at night. The sand resembled millions of little blue fairy lights.

An amazed photographer from Taiwan thought he was capturing blue sand on his camera and excitedly posted the photos online, but it turned out that the glowing was actually caused by living creatures.

The phenomenon occurs when a certain form of bioluminescent plankton called Lingulodinium polyedrum washes up on the shoreline.

Most of the time, these little creatures go about their business and float around the ocean undetected. However, when currents are strong or they get caught up in waves crashing on the shore, they start “stressing,” which causes them to glow.

The glowing sand phenomenon is also known as a “red tide” because of the reddish color it produces in the water during the daylight hours. The beauty of this natural event hasn’t gone unnoticed—director Ang Lee used footage of bioluminescent plankton in his hit film, Life of Pi.