Two Black Holes could Soon Merge and Destroy Their Galaxy

The central regions of many glittering galaxies, our own Milky Way included, harbor cores of impenetrable darkness—black holes with masses equivalent to millions, or even billions, of suns. What is more, these supermassive black holes and their host galaxies appear to develop together, or “co-evolve.” Theory predicts that as galaxies collide and merge, growing ever more massive, so too do their dark hearts.

Black holes by themselves are impossible to see, but their gravity can pull in surrounding gas to form a swirling band of material called an accretion disk. The spinning particles are accelerated to tremendous speeds and release vast amounts of energy in the form of heat and powerful X-rays and gamma rays. When this process happens to a supermassive black hole, the result is a quasar —an extremely luminous object that outshines all of the stars in its host galaxy and that is visible from across the universe.

In a distant galaxy, a pair of black holes could be merging, and scientists on Earth have a front row seat to the event, for the first time ever. Although the merging process could take at least a million years, we’re now getting an unprecedented view of the last stages of the process, which could eventually release more energy than 100 million supernova explosions. 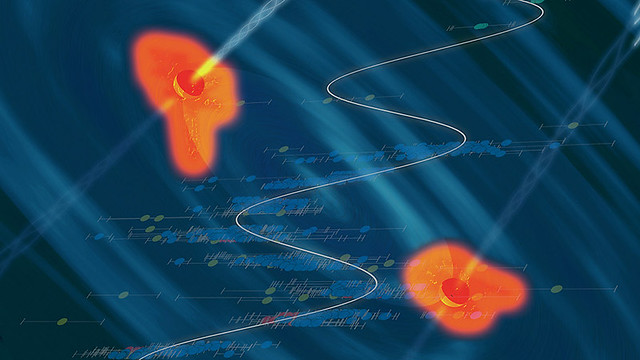 An artist’s conception of a black hole binary in a heart of a quasar, with the data showing the periodic variability superposed. (Santiago Lombeyda, Center for Data-Driven Discovery, Caltech) ~ click to zoom

The pair of supermassive black holes have been found by astronomers just one light year away from each other. When they will collide the entire galaxy they are located within — named PG 1302-102 – could be destroyed within a million years.

Or, of course, they already have been. The galaxy is so far away that the light from it takes far more than a million years to reach Earth. In fact, it’s 3.5 billion light years away.

S. George Djorgovski of the California Institute of Technology said that the black holes were discovered as a flicker in a quasar by the Catalina Real-Time Transient Survey. It is thought they are orbiting each other at a range of 180 billion miles.

Researchers believe that this discovery could shed some light on a long-standing mystery in astrophysics called the ‘final parsec problem’. That refers to the failure of theoretical models to predict what the final stages of a black hole merger look like, or even how long the process might take.

“Until now, the only known examples of supermassive black holes on their way to a merger have been separated by tens or hundreds of thousands of light-years,” said Stern.

“At such vast distances it would take many millions, or even billions, of years for a collision and merger to occur. In contrast, these black holes are at most a few hundredths of a light-year apart, and could merge in about a million years or less.”

But for now, the pair of black holes still need to be 100 percent confirmed. Still, in the long history of the universe, black holes have almost certainly collided before. Destroying whole galaxies in one fell swoop is not just science fiction.