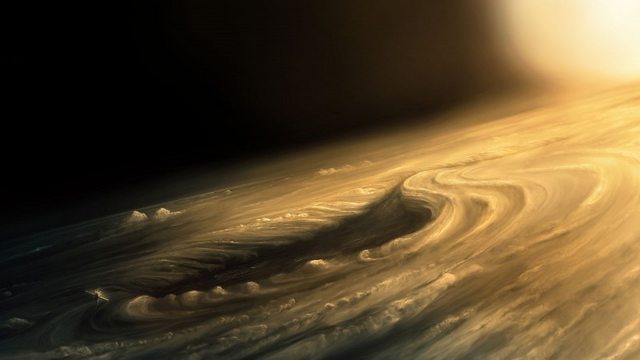 Beneath the 50-kilometer-thick (31 mi) destructive clouds of Jupiter lies a mammoth ocean of liquid hydrogen. Making up a whopping 78 percent of the planet’s radius, the ocean is 54,531 kilometers (33,884 mi) deep.

To put that into perspective, the deepest point of Earth’s ocean is the Challenger Deep in the Mariana Trench, which lies at a scant 11 kilometers (7 mi) below the surface. But it’s not just the sheer size of the ocean that’s totally incomprehensible; it’s the conditions under which it exists.

In order to convert the hydrogen gas into a liquid, you need to compress it with an insane amount of pressure; 100 million times that of Earth’s atmospheric pressure should do it. Under these conditions, the liquid hydrogen inside Jupiter takes on a profound characteristic and becomes something called liquid metallic hydrogen.

Pressures this high simply cannot be recreated on Earth, so this is only a theory right now, but it suggests that the extreme state of Jupiter’s interior causes electrons to be released from hydrogen atoms, allowing the creation of heat and electricity, key properties of a metal. Hence, Jupiter hosts not only the largest ocean within our solar system but also one of the most extreme.