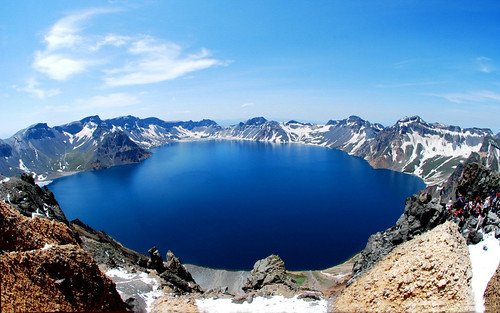 Heaven Lake is situated on the border between China and North Korea. The lake is situated inside a caldera and covers about 9.82 km². It is a stunningly beautiful lake that is typically covered in Ice from October to June.

It is also the home of a legendary monster called the Lake Tianchi Monster. The first sighting came in 1903, and it was said that there was a buffalo like creature that attacked 3 people and then retreated back into the water, after being shot six times.

In 1962, a man looking through his telescope reported that he saw two creatures chasing each other in the water, and hundreds of people confirmed the sighting on the same day. The description of the monster changed over the years, to a human like head on a 1.5 meter neck, with a white ring around the base of its neck and gray skin.

In 2007, a reporter named Zhuo Yongsheng said he shot 20 minutes of video, showing six unidentified creatures swimming in the lake. He released still frames of the film, in which six messy creatures were swimming and interacting with each other. He said they swam around for almost 1 hour and a ½ before retreating under the water.