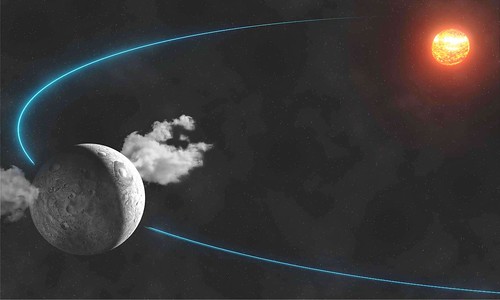 Is There Life on Ceres? Dwarf Planet Spews Water Vapor (Click to zoom)

NASA spacecraft Dawn is on approach to visit Ceres, a Texas-sized dwarf planet in our solar system, in March 2015. Almost everything about Ceres is a mystery, so it’s a sure shot we’re going to be surprised. Unlike protoplanet Vesta, which Dawn just explored, there are no meteorites linked to Ceres to help us unlock its secrets beforehand.

While Vesta is mostly dry, Ceres is believed to be made of rock and ice, possibly containing an ocean beneath its icy surface. Water is believed to comprise approximately 40 percent of its volume. Except for Earth, Ceres has the most water of any planetary body in our inner solar system.

We just don’t know how much of it is liquid. Maybe Dawn will tell us why Ceres has so much water, if indeed it does, and why it’s so different from Vesta.

Both Ceres and Vesta may yield important information about life on our planet. In fact, that’s one of the most compelling mysteries about Ceres. Does it or could it support life? As far as our science knows, there are three major components needed for life: a source of energy, liquid water, and chemical building blocks such as carbon.

In addition to having water, Ceres is close enough to the Sun to receive a fair amount of solar heating. We don’t know if it has an internal heat source. We also can’t be sure if it has the chemicals to produce life as we know it.

There’s even a theory that life on Earth may have originated on Ceres. If Earth was sterilized by impacts from other bodies, and Ceres had life that survived, then Ceres may have seeded our planet anew with its life when chunks of Ceres broke off and collided with Earth.
Have something to say? Let us know in the comments section .