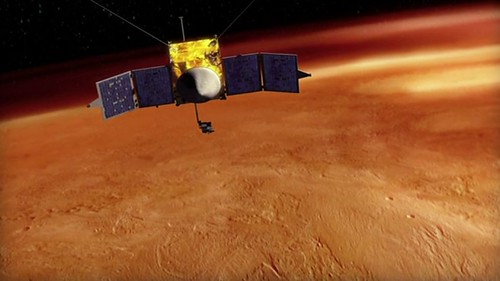 NASA’s Curiosity rover has not consistently sniffed methane on Mars, but the occasional burp after eight months is getting scientists excited again. On Earth, over 90 percent of the methane in our atmosphere is produced by living things. That’s why scientists are eager to figure out where Mars’s methane comes from and what’s causing its occasional release into the atmosphere.

There are several possibilities. One is the presence of methanogens, which are microbes that produce methane. It’s also possible that carbon-rich meteorites strike Mars’s atmosphere like an organic bomb and release methane when the Sun’s ultraviolet radiation heats the carbon to extreme temperatures.

There are many more theories as well.The second mystery is why Mars’s methane keeps disappearing.

When our orbiting spacecraft couldn’t find any methane after it was initially detected, it didn’t make sense. According to science as we understand it, methane can’t disappear in only a few years.

It’s believed to be stable for about 300 years in the atmosphere. So that raised the question of whether we had actually detected the gas at all. But some of the occasional spikes were undeniable. So maybe winds are blowing the methane beyond Curiosity’s range of detection, although that doesn’t explain certain findings by orbiting spacecraft.