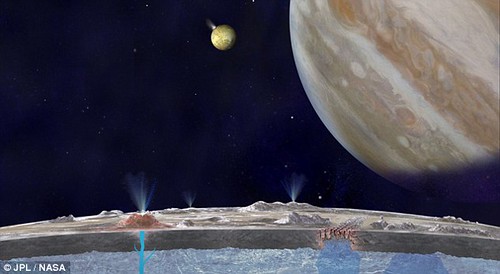 This is another alien vanishing act. Scientists declared in late 2013 that NASA’s Hubble Space Telescope had detected 200-kilometer-high (120 mi) geysers shooting into the air from the south pole of Europa, Jupiter’s icy moon. Suddenly, the search for alien life seemed potentially easier.

An orbital probe may have been able to fly through the geysers and sample Europa’s subsurface ocean for signs of life without landing on its icy surface.But follow-up observations aren’t finding water vapor, and a reanalysis of older data has sparked questions about whether the geysers were ever there in the first place.

Some scientists argue that Hubble didn’t detect geysers in October 1999 and November 2012, so we’ve always known that geysers are transient on Europa.

For now, the discovery of geysers has turned into a mystery. With NASA expecting to send a robotic probe to Europa, it’s important to find out if the geysers are real so they can design their instruments accordingly.