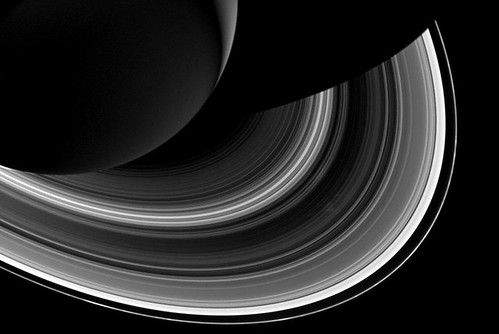 Cassini spied just as many regular, faint clumps in Saturn’s narrow F ring, like those pictured here, as Voyager did, but it saw hardly any of the long, bright clumps that were common in Voyager images. Image credit: NASA/JPL-Caltech/SSI. Click on the image for the full image and caption (Click to zoom)

When comparing the recent data from NASA’s spacecraft Cassini against the data from NASA’s Voyager 30 years earlier, scientists found a sharp decline in bright clumps in Saturn’s F ring (although the total number of clumps stayed the same).

The F ring appears to be constantly changing, sometimes in a matter of days. “It makes for an irresistible mystery for us to investigate,” said Robert French of the SETI Institute in California. Some of Saturn’s rings are composed of pieces of ice that may be as big as boulders.

But the F ring is formed of ice particles that are as small as specks of dust (scientists call it a “dusty ring”). It would resemble a light fog if you were to look at it.Sometimes, ice particles near the ring clump together into mountain-sized snowballs called moonlets.

When these moonlets collide with the F ring, which can happen on each orbit, they act like bumper cars that pulverize the specks of ice already comprising the ring.

That creates bright clumps.But the life and death of these moonlets may be determined by how the orbit of Prometheus, one of Saturn’s moons, aligns with the F ring. Sometimes, that alignment spurs the creation of moonlets, and sometimes, it destroys those already created.

The number of moonlets may directly affect the number of bright clumps. At least that’s one theory.Another theory is that the F ring is newer than we thought and was created when a bigger ice moon was torn apart. In that case, the F ring is just changing as it evolves. Our scientists won’t know which theory, if either, is correct until we get more data from observing the F ring over time.