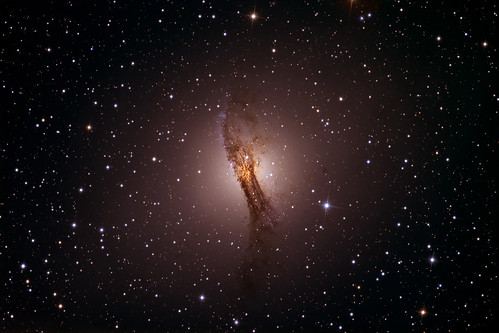 To the untrained eye, it might be difficult to distinguish Centaurus A as anything remarkable, but when you take a closer look, there’s something peculiar going on here. Centaurus A is large by galaxy standards, and large galaxies often come in one of two flavors: spiral and elliptical.

But when astronomers took a look at this galaxy using radio imaging to peer through the veil of dust, they revealed a spiral hidden underneath. This is quite odd, since galaxies are generally one or the other. It is the only elliptical galaxy we’ve ever found that has spiral arms. The theory is that Centaurus A absorbed a spiral galaxy some millions of years ago, but such mergers don’t often—or ever, really—leave the spiral arms intact, so we have no clue what is happening here.