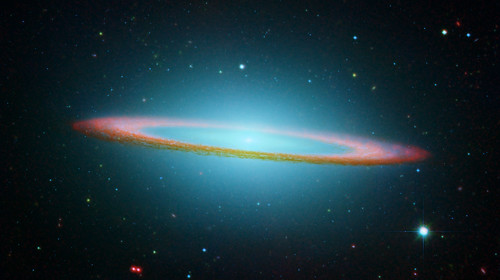 The Sombrero Galaxy, unsurprisingly, bears a striking resemblance to the hat of the same name. It has a large bulge in the center where some imaginary cosmic giant’s head might go and a broad, sweeping “brim.”

When we look at the bulge a bit closer, you can see that it’s actually made up of several different clusters of stars, rather than just one big one.

The brim is pretty strange, too: Its intricate detail is another one of those things about space that makes science scratch its head. We’re not sure how rings like this were able to form. It’s also highly likely that the heart of the Sombrero Galaxy harbors a massive black hole.