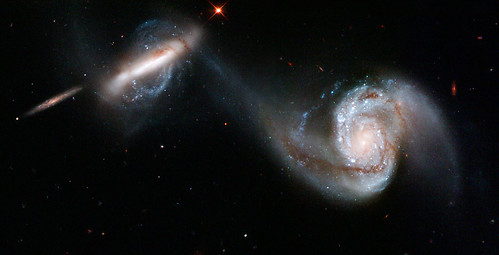 Arp 87 is what you get when two galaxies enter into a steel cage match—and only one leaves. Galactic collisions are actually pretty common and sometimes result in a lot of near misses, like what is going on here.

These two galaxies almost ran into one another a few billion years ago and gravity has strung out material between the two as they moved apart.

It’s likely that they’ll sweep back toward one another in a series of near misses until they eventually merge into one big galaxy. For now, they remain tethered together by a thin stream of stars, gas, and dust particles, like enormous intergalactic bolas, which can only mean one thing: space Incas.