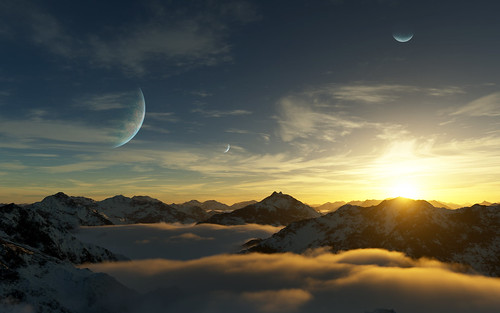 This world, which is about seven times as massive as Earth, orbits a bit farther out than its planetary sibling Gliese 581g.
When 581d was first discovered in 2007, many scientists regarded it as too cold to be potentially habitable. In the years since, however, atmospheric-modeling studies have suggested that the planet may indeed be able to support life as we know it — provided 581d is warmed by a greenhouse effect.
To determine if this the case, researchers will likely need to study the planet’s atmosphere directly. That sort of work could be years off, since it would probably require the development of new and advanced telescopes. More information about the planet: https://goo.gl/gWcebj

On 18 April Astronomers have found the first Earth-sized exoplanet within a star’s habitable zone. The planet is the closest thing yet to the coveted ‘Goldilocks’ orb that scientists have long sought — a world roughly the size of Earth orbiting a star at a distance that is just right for liquid water to exist. Read more about the article Epochal discovery in space: the first cousin of Earth that could host alien life! You can Also browse our site reading about alien planets here.