Astronomers have found more than 1000 planets beyond our solar system, and thousands more await confirmation by follow-up observations. Many of these alien worlds are too hot or too cold to support life as we know it, but researchers have found a few that appear to be much more hospitable. So, Here’s a brief rundown of the best candidates. 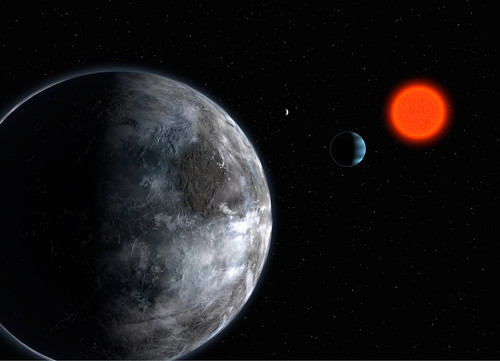 Gliese 581g is a possibly habitable planet that was detected by a group of astronomers in 2010 and is nicknamed “Zarmina.” This unconfirmed planet orbits a red dwarf star that is only 22 light-years away from Earth! It has a mass of approximately 3.1 to 4.3 times that of the Earth, which puts it under the category of “super-Earth.” This planet sits perfectly in the “Goldilocks Zone,” so there is a high possibility of liquid water and, therefore, life.

Gliese 581g has at least four, and possibly five, planetary neighbors. The team that spotted Gliese 581g also detected another planet, known as 581f, circling much farther away from the star. But scientists are still arguing about that world’s existence, too. More information about the planet: https://goo.gl/poy6hU