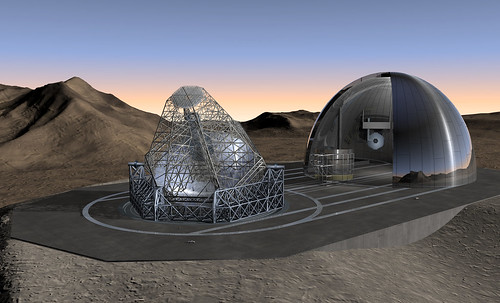 The European Extremely Large Telescope (E-ELT) is even bigger than Hawaii’s Thirty Meter Telescope. At 39 meters in diameter, it will be the largest light telescope in the world. But there is a part of its name that is less straightforward: E-ELT is not in Europe.

The name comes from the consortium that operates it, the European Southern Observatory (ESO) made up of 14 European countries and Brazil. In the Chilean desert, where high and dry conditions are optimal for astronomy, the ESO already operates 8 telescopes including the Very Large Telescope and ALMA, an array of radio telescopes.

Extremely Large Telescopes will vastly advance astrophysical knowledge, allowing detailed studies of subjects including planets around other stars, the first objects in the Universe, super-massive black holes, and the nature and distribution of the dark matter and dark energy which dominate the Universe.