When most of us were in school, we learned about the differences in gravity between planets in our solar system. We also learned about how enormous the Sun is and that the gas giants are prone to some seriously unusual storms. But over the course of the last few years, modern astronomy has evolved, revealing our solar system to be more peculiar than we ever imagined.

5
The Strange Surface Of Mars 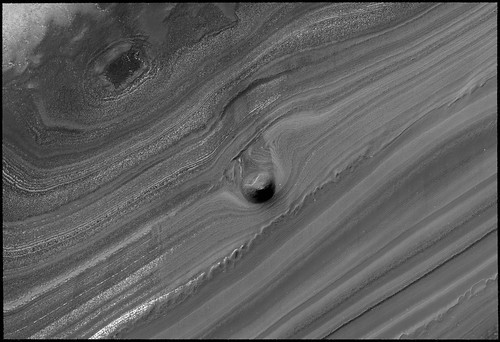 Mars is seriously misunderstood. Most of time -in the media— astronomers are discussing the possibility of Mars once being home to oceans of liquid water or ancient forms of bacteria. Most recently, it was revealed that the most primordial forms of earth microbes likely originated on Mars—before they were transferred to Earth via asteroid impacts.
Rarely do we see some of the mind-blowing images of the most bizarre surface features Mars has to offer, which is a shame, since most of these images would reinvigorate interest in Mars—a planet with an exciting past. Since the Mars Reconnaissance Orbiter began orbiting the Red Planet in 2006, its HiRISE camera has unveiled some of these incredible regions.
One of the most incredible of these depicts trails left by massive dust devils, the Martian equivalent of tornadoes. They carry away the outermost layer of iron oxide (the agent responsible for the reddish hue of the soil), revealing the dark grey color of the basalt located just underneath.