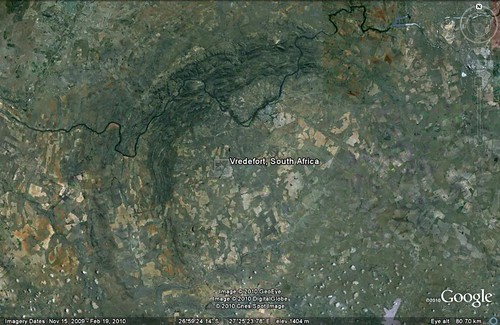 Vredefort crater, or dome, is the largest verified impact crater on earth, and can be found around the town of Vredefort in the Free State Province of South Africa. The asteroid that hit Vredefort is estimated to be the largest to hit earth in the last 4 billion years, and was over 15km (9.3mi) in diameter.

The resulting crater is just over 300km (186.4mi) in diameter, and its huge size has earned it a title as a world heritage site. It was originally thought that the dome was caused by volcanic eruptions, but in 1990 it was declared that a huge bolide caused the impact structure, as tell-tale shatter cones could be found for miles around.

The crater is currently under threat due to the possibility of mineral deposits around the edges, which could result in huge mining industries, destroying a part of this marvel.