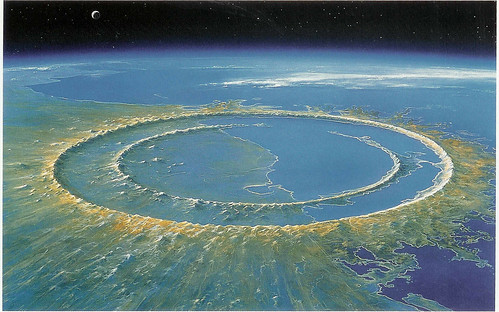 Chicxulub Crater is a huge ancient crater, buried underneath Yucatan Peninsula, in Mexico. The crater is more than 180km (110mi) in diameter, making it the 3rd largest confirmed impact structure on earth. The impacting bolide that formed the crater had to have been at least 10km (6mi) in diameter.

The age of the rocks show that the impact structure is roughly 65 million years old, and falls right at the end of the cretaceous period.

After almost 20 years of research, on all fields, scientists have concluded that the impact at Chicxulub triggered the mass extinction at the K-T boundary, including those of the dinosaurs between the cretaceous and tertiary periods.