There are hundreds of impact craters found around the world, but less than 50 that are considered Large (over 20km in diameter). As an example, one of the most well-known and best preserved craters is Barringer crater in Arizona (35°2′N 111°1′W), which is just over 1km in diameter, and was created by a nickle-iron meteor, which was about 50m (54yards).

This is a minuscule size compared to the large craters of the world, and in this list you can read up on the very biggest of the big. I have included coordinates, so feel free to follow along on Google earth. Don’t be disappointed if you do not see the full effect of the crater on Google earth, as most of these large craters have eroded away, and can only be seen through density scanners and specialized photos. 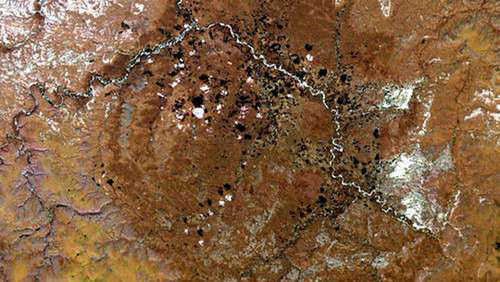 Popigai crater in Siberia, Russia, comes in tied with Manicouagan crater, as the 4th largest verified impact crater on earth, and it is just about 100km (62mi) in diameter. The bolide impact happened over 35 million years ago.

Geologists were fascinated by the Popigai crater for decades before any investigatory expeditions where under taken, as the entire area was off limits due to diamond mining in the area. Finally, in 1997, investigations were under way. The bolide was identified as either an 8km (5mi) diameter chondrite asteroid, or a 5km (3.1mi) diameter stony asteroid.

It was discovered that the shock pressure from the initial impact instantaneously turned graphite all along the ground, within a 13.6km (8.4mi) diameter of the impact site, into diamonds.