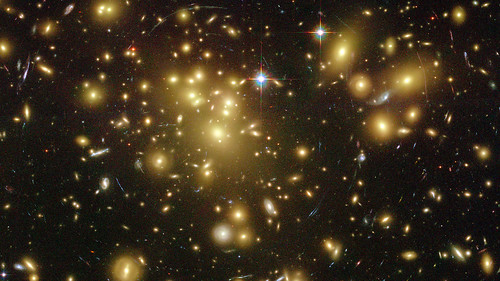 El Gordo is located over seven billion light years from Earth, meaning that it is being observed at a young age. According to the scientists involved in this study, this cluster of galaxies is the most massive, the hottest, and gives off the most X-rays of any known cluster at this distance or beyond.

The central galaxy in the middle of El Gordo is unusually bright and has surprisingly blue colors in optical wavelengths. The authors speculate that this extreme galaxy resulted from a collision and merger between the two galaxies at the center of each cluster.

Using Spitzer data and optical imaging it is estimated that about 1% of the total mass of the cluster is in stars, while the rest is found in the hot gas that fills the space between the stars and is detected by Chandra This ratio of stars to gas is similar with results from other massive clusters.