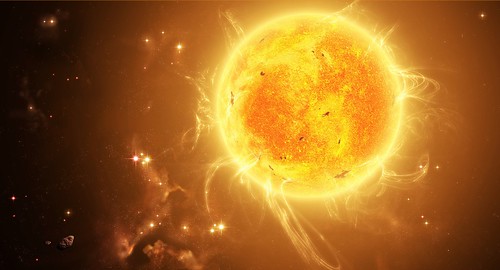 The Sun (a yellow dwarf star), is by far the largest object in the solar system. It contains more than 99.8% of the total mass of the Solar System, Jupiter contains most of the rest. The Sun is, at present, about 70% hydrogen and 28% helium by mass; everything else (“metals”) amounts to less than 2%. This changes slowly over time as the Sun converts hydrogen to helium in its core. Conditions at the Sun’s core (approximately the inner 25% of its radius) are extreme. The temperature is 15.6 million Kelvin and the pressure is 250 billion atmospheres. The Sun’s power (about 386 billion billion megawatts) is produced by nuclear fusion reactions. Each second about 700,000,000 tons of hydrogen are converted to about 695,000,000 tons of helium and 5,000,000 tons of energy in the form of gamma rays.

You can browse our site reading about the Sun here.