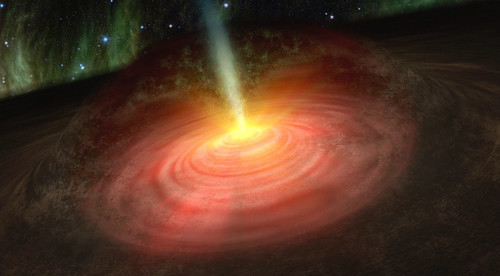 Swift J1822.3-1606 is a special type of star – known as a neutron star – located about 20,000 light years away in the constellation of Ophiuchus. (There are generally three ways a star can end its life: as a white dwarf, for smaller stars like our sun; as a neutron star, for much larger stars; or as a black hole, for the largest. The latter two are formed following the largest explosions known in the universe – supernovas.) There are a few different types of neutron stars: a magnetar, with the strongest magnetic fields in the universe; and a pulsar, which shoots beams of electromagnetic radiation from its poles (somewhat like a lighthouse). For years, everything we knew about these stars told us that they could only become one or the other class, never both. But in 2011, Swift was discovered to have the properties of both. It is only the second star ever found to have such qualities, after a discovery of another a few months before.
The mystery? Astronomers have no idea how a star can possibly exhibit properties of both stars. While the fact we have discovered two in recent years means that they are more numerous than once thought, we are still no closer to discovering the secret behind these mysterious stars.