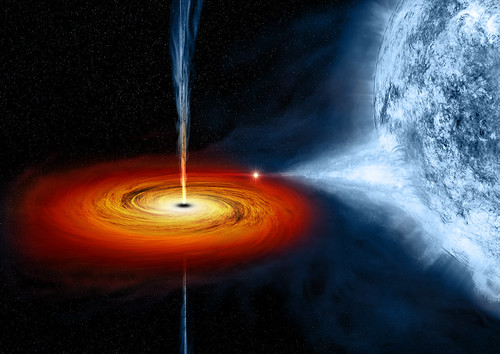 This mystery deals with probably several million stars, as opposed to just one. At only 2.5 million light years away, The Andromeda Galaxy is the closest spiral galaxy to our own. Anyone with an Apple computer running Lion should have a good idea of what this galaxy looks like. In the center of this galaxy is a supermassive black hole, like one enormous vacuum cleaner, so strong that even light cannot escape. In 2005, the Hubble space telescope zoomed in on the galaxy’s core and discovered a blue, pancake shaped disk rotating dangerously close to the black hole. Further analysis showed that this was not just hot dust: the glow was coming from millions of young blue stars. These stars are zipping around the black hole at more than 2.3 million miles per hour. That is fast enough to circle the earth at the equator in only 40 seconds. The thing about this disk is that – given what we believe we know about the tidal forces around black holes – they should not exist. The gas which formed them, and the stars themselves, should have been torn apart by the immense gravity of the black hole. How they were able to remain intact in such a close orbit, remains a mystery.