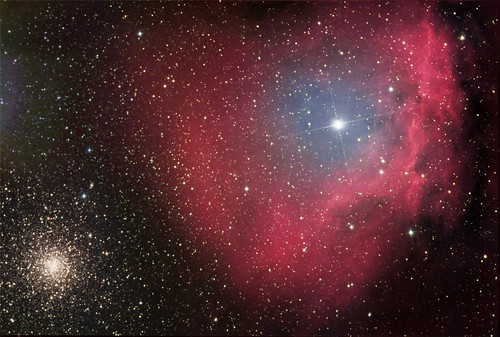 Messier 4 is a globular cluster, about 7,200 light years away from earth. If galaxies had human life cycles, this one would be an old timer at 12.2 billion years. For any who are unfamiliar with astronomy: it is believed that all galaxies eventually become globular clusters once all the gas and dust used for star formation has been depleted. This means all the stars are expected to be very old stars in the late stages of their lifespan. While looking at stars in this particular galaxy in September of 2012, a team in Chile found a star rich with a material called lithium.Although lithium is not an uncommon element for a star, it is a compound which burns off typically within the first few billion years of a stars lifecycle. As most of the surviving stars in this cluster are around 10 billion years old, finding a star with this element was like finding a needle in a haystack. It is like a teenager living in a nursing home: it just doesn’t seem to fit. Scientists think the star may have found a way to actually replenish it lithium supplies, which in a way keep the star from aging. Many have nicknamed it “the fountain of youth star.” Exactly how it replenished lithium supplies is a complete mystery, which still puzzles astronomers today.