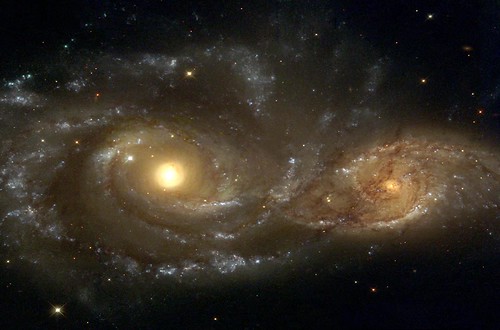 Things are constantly moving around in space—orbiting, spinning, and hurtling through the void. Because of this—and the enormous gravitational pull between them—galaxies tend to collide with one another on a regular basis. That’s probably not too surprising—all it takes is one look at the moon to realize that space tends to grab things and slam them together.

When two galaxies containing billions of stars collide, it’s got to be complete turmoil, right? Actually, in galactic collisions, the probability of two stars colliding is practically zero. How can that even happen?

Apart from being really big, space’s other defining feature is that it’s pretty empty. It’s called space for a reason, after all. While galaxies might look solid from a distance, remember that we’re in a galaxy right now, and the nearest star is 4.2 light years away. That’s a lot of space.