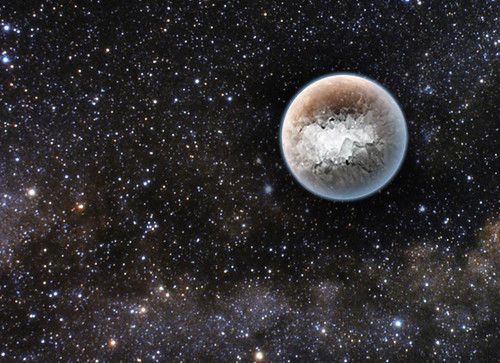 In many cases, a binary star system includes one star that actually does stuff, while the other is too busy being dead to contribute. One such relationship, between PSR J1719-1438 and its deceased brethren PSR J1719-1438b, has resulted in the dead star being altered in a highly unusual fashion.

1438b, an extinguished white dwarf, has been stripped of virtually all of its starlike qualities, leaving behind a rocky core that’s more planet than star. More than likely, the murderer is the host star, whose gravity sucked away all of 1438b’s mass, leaving behind nothing but a core.

If that’s not enough, it might as well be renamed Planet Rihanna, since it literally shines bright like a diamond. Though tiny and stripped of all elements save for carbon and oxygen, 1438b is actually incredibly dense and heavy, even more so than Jupiter.

This ultra-compact composition appears to be crystalline in nature, which means that much of PSR J1719-1438b likely resembles a giant diamond.