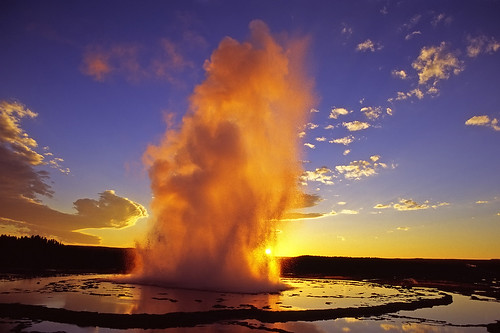 Yellowstone Park is alive with geysers, hot springs, and boiling mud pots. Some of the fun went out of it at the turn of the 21st century though, when geologists realized that there are such things as supervolcanoes and that Yellowstone Volcano is Exhibit A.

Since then, everybody has been wondering when it is going to explode. Well, it turns out that isn’t likely to happen at any time relevant to human civilization. Recent studies have shown that, while there is certainly a lot of magma down there, it isn’t in eruptible form.

There has never been a megacaldera eruption in recorded history, so no one really knows what signs to look for. There could be a lot of earthquakes and other natural disasters before the main event. Then again, ordinary volcanoes sometimes erupt unexpectedly.

Quite possibly, supervolcanoes do too. One interesting candidate might be Chile’s Laguna de Maule, though the volcano is not currently erupting and shows no threatening behavior whatsoever at the moment. It has simply been inflating at a rate of 24-28 centimeters (9.5-11 in) per year without anybody knowing why.

Laguna del Maule is about the size of California’s Long Valley Caldera and sits on the Argentine border. It has had at least 36 small-scale eruptions over the last 20,000 years. Researchers think they have detected enough eruptible magma down there to produce a VEI 6 eruption (not a supereruption—about the size of Pinatubo in 1991), but they don’t know for sure if that’s all there is.