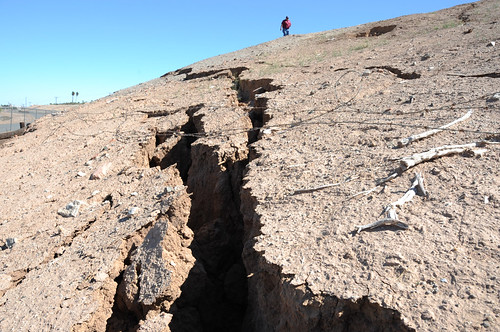 An earthquake happens when rocks move along a fault. The fault line can be just a local break—in which case the shaking will also probably be local—or it can be along a major boundary between two tectonic plates. Plate movements store up enormous amounts of energy in the rocks along such a boundary, and when that slips the results can be catastrophic.

Many big earthquakes have foreshocks, but scientists were surprised to find that rocks can creep past each other without any shaking at all. They learned this after deploying extremely sensitive equipment along the San Andreas fault in California (where the Pacific and North American plates are slipping past each other), and the Alpine fault in New Zealand (where the Pacific plate is sliding against the Australian continental plate).

The Alpine fault has had some major earthquakes in the past, but its central section has been disturbingly quiet. Scientists began monitoring it closely, thinking that section might be storing up apocalyptic amounts of potential energy.

Instead, they found seismic tremors—a series of small, creeping earthquakes that are further down than typical quakes and last up to 30 minutes each.Something similar has been found along parts of the San Andreas fault.

Scientists aren’t quite sure what the tremor is up to. It could be storing up stress for a future earthquake, or it might actually be releasing some of that pent-up energy and lessening the intensity of the quake that will occur next time the fault zone slips.