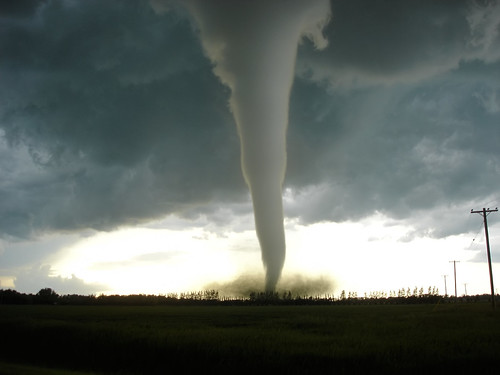 Everybody runs for shelter when they see a tornado coming, but how is it that we can see the tornado in the first place? Air is invisible, after all. Well, technically speaking, what we see is actually a condensation cloud made of water droplets and sometimes dirt and debris.

It forms inside the invisible funnel of moving air that is the actual tornado.Tornadoes typically originate in supercells—thunderstorms that look awesome and have a rotating updraft. No one is quite sure what starts the funnel moving downward from the supercell to the ground.

It may be related to temperature differences along the edge of the nearby downdraft. Water vapor usually condenses inside the rotating funnel of air as it descends from the supercell, but tornadoes can and do start wreaking havoc on the ground long before the funnel has completely formed.

For instance, here’s a tornado on the ground with the funnel cloud only partly condensed. If this was heading your way and you didn’t see the debris, you might just stand there watching the natural drama. This could be a fatal mistake.