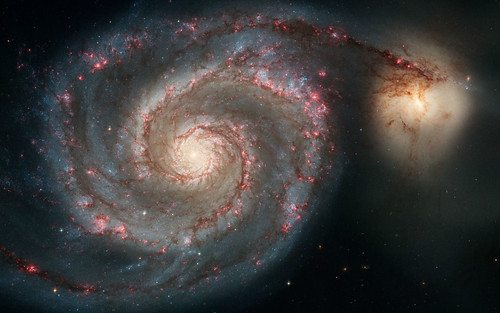 So, let’s take stock of where we are here. We have ascertained that the universe is pretty astounding when considered at a vast scale. We have established that the universe consists of atoms. We have also worked out that atoms contain space mostly and a very tiny amount of matter. Leaving aside the worrying fact that we are made of atoms, how much matter is there in the universe?

According to the Planck mission team, and based on the standard model of cosmology, ordinary matter accounts for a staggeringly minuscule 4.9% of the total. The rest is 26.8% dark matter and 68.3% dark energy. I’m going to obstinately ignore the dark energy, because that’s clearly the equivalent of nothing – it’s not matter in any case. Can dark matter give a bit of substance to our existences?

Dark matter is at present no more than a very strong hypothesis among cosmologists and astronomers. It comes about for the very reason that we need to account for a large part of the mass that appears to be missing from the universe. Yes, I did write ‘missing’ there. The official view is that much of the universe’s matter, 26.8% of it, is simply… not there.

That is not the same as saying that nothing is there at all. There must be something, it is thought and this is clear since discrepancies exist between the mass of large astronomical objects determined from their gravitational effects and the mass calculated from the visible matter they contain. At best, dark matter can be thought of as matter that cannot be illuminated with light. It neither emits nor absorbs light or other electromagnetic radiation at any significant level. At worst, dark matter does not exist at all, but either way there is a significant amount of the universe unaccounted for.

Why are we so sure there is something there? It appears that we cannot just write the ‘matter discrepancy’ off like so much shop stock left unsold at the end of the financial year. The fact is that something as yet undetermined is having a very real effect upon the orbital velocities of stars in the Milky Way and is responsible for “missing mass” in the orbital velocities of galaxies in clusters, (as calculated by astronomers Jan Oort and Fritz Zwicky).
Whichever way you look at it the behaviour of atoms and things unseen in the universe is a complete mystery.