Crazy is such an ugly word but how else can we describe these concepts? They each try to explain some aspect of our universe in a manner that just seems bizarre.

Granted, most things in the universe are odd already, and we haven’t even begun to fully understand a fraction of it, but there’s something particularly disturbing about these theories. They express ideas that are too mindboggling and inconceivable, even for fellow scientists. While none of them have been verified or completely dismissed, we should still speculate because in a universe as crazy as ours, we just never know what might be true.

5
White Holes
The opposite of a black hole 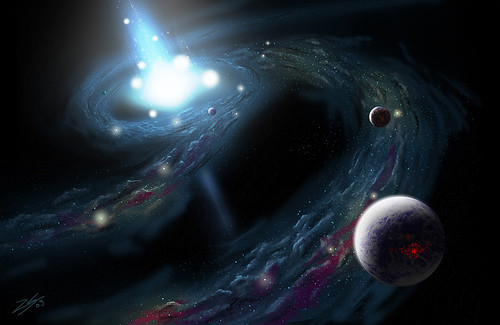 White holes, unlike their black hole neighbors, have not been studied because they only exist in an extremely hypothetical situation. In fact, there’s not even a clear understanding what a white hole could be. Is it the other end of a black hole? Is it a wormhole? Is it something else entirely? Generally, white holes are thought to spit out matter, much like black holes eat matter. For this to happen, the matter that passes through a black hole would have to be protected during the voyage, avoiding the process of merging into singularity. No white holes have ever been detected, up to this point, and no black holes have been seen without an event horizon (the guarding force around a black hole that prevents us from seeing them) that may show us just how matter passes through. To do that, white holes would have to break a few laws of physics and reinstitute some ideas that have been discarded; that’s asking a lot. Until then, white holes are best left for hypothetical ideas or naughty jokes.