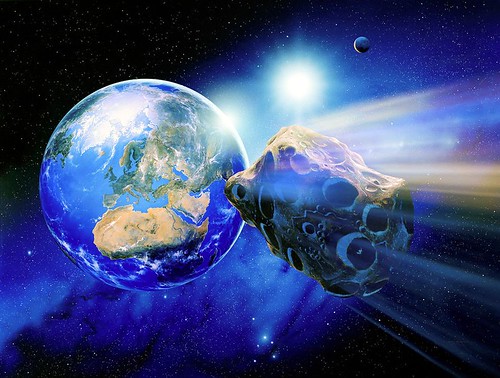 Okay – that is not actually true – but it is very close. In 1986, Duncan Waldron discovered a asteroid (5km across) that is in an elliptic orbit around the sun with a period of revolution virtually identical to that of Earth. For this reason the planetoid and earth appear to be following each other. The periodic planetoid is named Cruithne (pronounced krin-y?) after an ancient group of Scottish people (also known as the Picts). Because of its unusual relationship with Earth, it is sometimes referred to as Earth’s second moon. Cruithne, is fainter than Pluto and would require at least a 12.5 inch reflecting telescope to attempt to be seen. Since its discovery, at least three other similar asteroids have been discovered. These types of objects are also found in similar relationships to other planets in our Solar System. In the image above (courtesy of Paul Wiegert), the earth is the blue circle with a cross in it, and Cruithne’s orbit is shown in yellow.