Vega is the brightest star in the constellation Lyra the Harp. That’s why it’s often called the Harp Star. Observers in the Northern Hemisphere can see the star Vega come into view in the northeast in mid-evening in May. Look for this star in the very early evening in June – high overhead on autumn evenings – in the northwestern quadrant of the sky on December evenings.

Vega is easily recognizable for its brilliance and blue-white color. You can also easily pick out its constellation Lyra, which is small and compact, and consists primarily of Vega and four fainter stars in the form of a parallelogram.
The little constellation Lyra has some interesting features. Near Vega is Epsilon Lyrae, the famed “double-double” star. Between the Gamma and Beta stars is the famous Ring Nebula, visible in small telescopes.
Vega is one of three stars in an asterism – or noticeable star pattern – called the Summer Triangle to the early evening sky. The other two stars in the Triangle are Deneb and Altair. You can see the Summer Triangle in the evening beginning around June, through the end of each year. 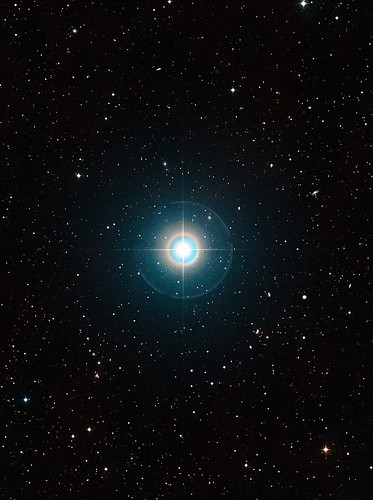 Vega (click to zoom)
This causes Vega to produce 35-40 times the energy of the sun, which in turn shortens its lifetime. At about 500 million years, Vega is already middle-aged. Currently it is only about a tenth the age of our sun, and will run out of fuel in another half-billion years.