Arcturus, a red giant, looks orange to the eye. It is the brightest star on the northern half of Earth’s sky dome. Arcturus is especially noteworthy for its large proper motion, or sideways motion across our sky. Only Alpha Centauri – our sun’s nearest neighbor among the stars – has a higher proper motion among the first-magnitude, or bright, stars in the stellar neighborhood.

Arcturus is a type K1.5 IIIpe orange giant star, with an absolute magnitude of −0.30. It has likely exhausted its hydrogen from the core and is currently in its active hydrogen shell burning phase. It will continue to expand before entering horizontal branch stage of its life cycle.
Arcturus is thought to be an old star. It appears to be moving with a group of at least 52 other such stars, known as the Arcturus stream. Arcturus is likely to be considerably older than our sun. When the sun evolves to become a red giant, the sun might be a star much like Arcturus is now.
The closest approach of Arcturus will happen in about 4,000 years, when the star will be a few hundredths of a light-year closer to Earth than it is today.
The red giant Arcturus is roughly 25 times the diameter of our sun. It is not the largest of the red giant. Because of its larger size, in visible light Arcturus radiates more than 100 times the light of our sun. If you consider infrared and other forms of radiant energy, Arcturus is about 200 times more powerful than the sun. Its mass is hard to exactly determine, but may be slightly greater than that of our sun (1.1-0.4+0.6 solar mass). 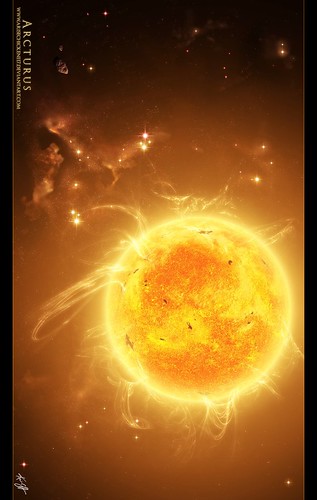