Rigel Kentaurus is the third-brightest star in the night sky. However, its brightness is due to the proximity of the system — commonly known as Alpha Centauri — which is the sun’s closest neighbor, about 4.3 light-years away from Earth. Rigel Kentaurus is part of a triple star system, and the naked-eye star itself is a double star.

Its two stars are dwarfs that spin around each other every 80 years at an average distance of 23 Earth-sun distances, or astronomical units. This puts the stars at about the same equivalent distance apart as the sun and Uranus in our own solar system, according to University of Illinois astronomer Jim Kaler.
By itself, Alpha Centauri A is the fourth brightest star in the sky; just a bit dimmer, by 0.02 of a magnitude, than Arcturus. It is a yellow star of the same type (G2) as the sun, and it is about 25 percent larger. Alpha Centauri B is an orange K2-type star, slightly smaller than the sun. Proxima Centauri is a red dwarf about seven times smaller than the sun, or one-and-a-half times bigger than Jupiter.
In 2012, astronomers discovered an Earth-size planet orbiting Alpha Centauri B, which is the smaller of the two dwarfs in Rigel Kentaurus. The planet, however, is far too close to its star to support life as we know it. 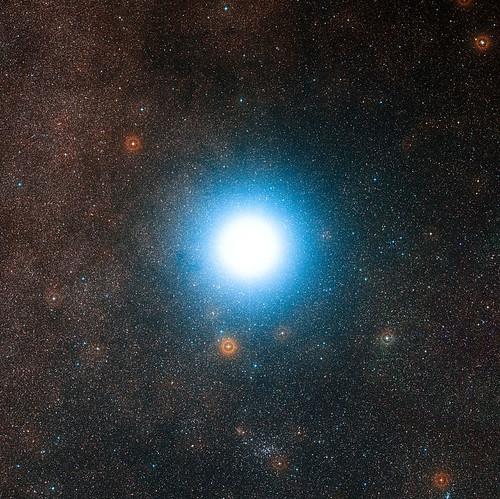