is the brightest star in the southern constellation of Carina, and the second brightest star in the night-time sky, after Sirius. Canopus’s visual magnitude is −0.72, and it has an absolute magnitude of −5.53. Canopus is a supergiant of spectral type F. Canopus is essentially white when seen with the naked eye. It is located in the far southern sky, at a declination of −52° 42′ (2000) and a right ascension of 06h24.0m.

In the southern hemisphere, Canopus and Sirius are both visible high in the sky simultaneously, and reach the meridian just 21 minutes apart. It is a circumpolar star when seen from points that have latitude south of 37°18′ south;
F-type supergiants have been described as yellow-white or white. Canopus has a B-V color index of 0.16 where 0 is a blue-white, indicating it is essentially white, although has been described as yellow-white. It has less yellow than Altair or Procyon. It may be that some observers have perceived it as yellow-tinged owing to its being located low in the sky and hence subject to atmospheric effects.
Canopus is the most intrinsically bright star within approximately 700 light years, and it has been the brightest star in Earth’s sky during three different epochs over the past four million years. Other stars appear brighter only during relatively temporary periods, during which they are passing our solar system at a much closer distance than Canopus. About 90,000 years ago, Sirius moved close enough that it became brighter than Canopus, and that will remain the case for another 210,000 years. But in 480,000 years, Canopus will once again be the brightest, and will remain so for a period of about 510,000 years. Canopus is part of the Scorpius-Centaurus Association, a group of stars which share similar origins. 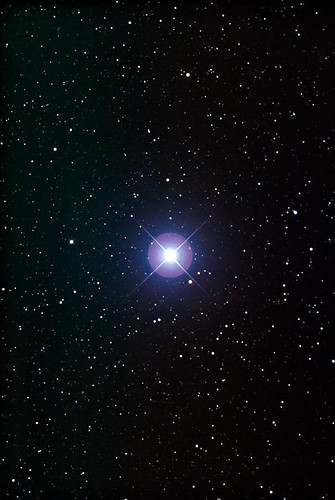