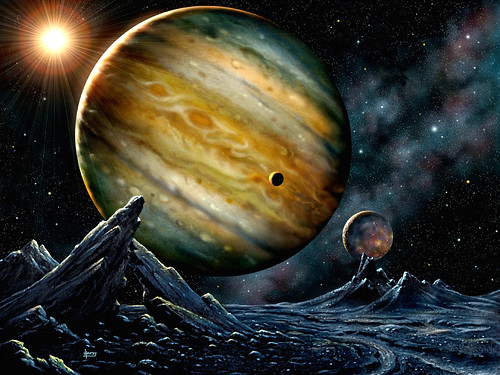 6. Galileo didn’t invent the telescope. The earliest known working telescopes appeared in 1608, and are credited to Hans Lippershey. Among many others who claimed to have made the discovery were Zacharias Janssen, spectacle-makers in Middelburg, and Jacob Metius of Alkmaar. The design of these early refracting telescopes consisted of a convex objective lens and a concave eyepiece. Galileo used this design the following year.

7. Contrary to popular belief, Jupiter is not a big ball of gas with a small solid core. Here is why: The Jovian, Jupiter-like planets, which also include Saturn, Uranus and Neptune have extensive gaseous atmospheres which eventually become compressed into liquid oceans of primarily hydrogen and helium. As pressures increase, hydrogen is even forced into a metallic state which is the basis for creating the strong magnetic fields which surround all four Jovian worlds. It would be much better to describe these planets as liquid worlds with extensive gaseous atmospheres.