The Most Strangest Things Ever Discovered in Space

Space is an absolutely crazy place. Most science fiction writers throw in a planet with two stars that looks vaguely like Southern California, and call it a day. But the cosmos is a lot stranger than we give it credit for.

5
A Massive Mystery Force Beyond Our Universe
Just when you think they can’t find any more terrifying things in the universe, astronomers go ahead and trump themselves. Apparently, there’s something unfathomably massive just beyond the borders of our visible universe. We can’t see what it is, but we know it’s there, because it’s dragging parts of the universe into it like water swirling around a drain.

All you need to understand about this diagram of the night sky from NASA is that the big colored chunks are being sucked toward something so far away that we can’t see it, and so powerful that nothing we know about the universe already can account for it. Scientists call it dark flow, because it was the only name that sounded ominous enough. 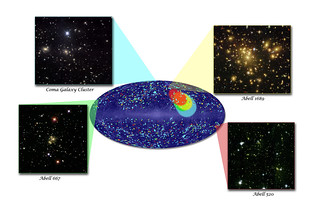