There’s no denying it—volcanoes are pretty awesome. As you gaze upon these looming mountains spewing forth fire so hot it causes the ground itself to melt into a gooey pool, you get a sense of just how destructive and chaotic Mother Nature can be. But what’s even cooler than the inspiration for Mount Doom? Space volcanoes. And they’re way more explosive, awe-inspiring, and destructive than anything you’ll find on Earth. 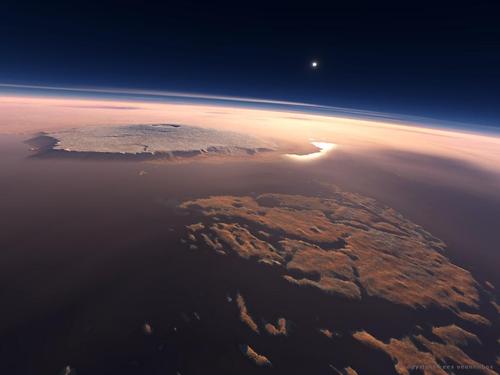 Most people know that Olympus Mons is the tallest mountain and volcano in the solar system, but its size is still difficult to fathom. Standing at a massive 25.7 kilometers (16 mi) high, this Martian monolith is just under three times the height of Everest and its base covers almost the same area as Arizona.

Despite Olympus Mons’s massive height, though, it would be remarkably easy to climb, as the average slope is only a 5° incline. But how did it get so big? Like volcanoes on Earth, Olympus Mons was formed due to cooling lava emerging from hot spots underground. However, unlike Earth, Mars doesn’t have a lot of tectonic motion, so these hot spots never shifted to a different location.

The lava just kept building up in the same place until it became the beast of a mountain that is Olympus Mons. In fact, the volcano is so heavy that it actually sinks into the Martian surface, creating a moat around its base.