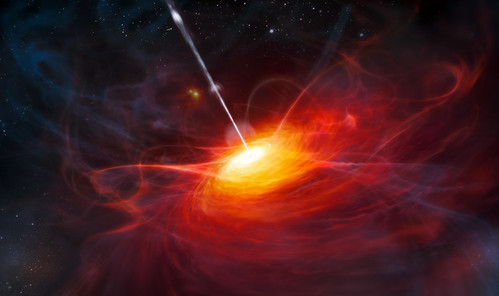 This is the most brilliant object ever found in the known univers. This quasar is the most distant one found to date. It is by far the brightest object discovered from the early universe, giving off 60 trillion times as much light as our sun. (A trillion is 1 million millions.).

It’s 12.9 billion years old. Data indicates that this black hole formed a mere 770 million years after the Big Bang. The distance to the quasar (ie., it’s age) was determined from observations made by the European Southern Observatory via the FORS2 instrument on the Very Large Telescope and instruments on the Gemini North Telescope.

Researchers estimate the quasar was powered by a black hole 2 billion times the mass of the sun, which is amazingly large. So large, in fact, that it’s hard to explain so early on after the Big Bang.

Of course, this just means that we have more studying to do and research to conduct. Undoubtedly, there are many more amazing things we’ve yet to discover.