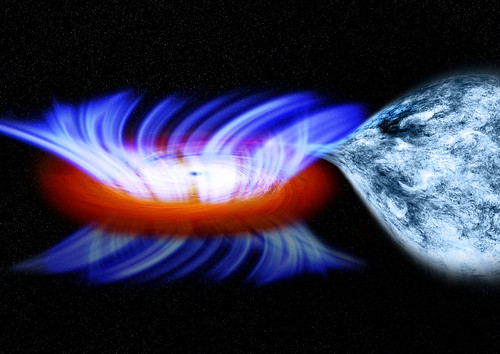 When we think of black holes, we generally think of structures like the ones that were previously mentioned—enormous beasts that devour entire star systems. However, not all black holes are interstellar destroyers; some are actually rather smallish. This brings us to IGR J17091-3624. Don’t let the unassuming name throw you; this black hole has a number of surprises.

First, it is believed that this black hole weighs less than three times the Sun’s mass. True, an object that is almost three times the mass of the Sun is rather large, but not when we are talking about black holes.

IGR J17091-3624 is actually near the theoretical mass boundary where black holes become possible, which means that, if this object were slightly smaller, it never would have been able to form into a black hole. But this tiny beast packs quite the wallop.

Observations from NASA’s Chandra X-ray Observatory indicate that this black hole is generating winds in excess of 20 million miles per hour (32 million kmh).

This amazing speed is nearly ten times faster than what has ever been seen from similar stellar-mass black holes (the smaller-sized black holes). Moreover, these speeds match some of the fastest winds generated by supermassive black holes (objects millions or billions of times more massive than IGR J17091-3624). So it seems that the old adage is true: size isn’t everything