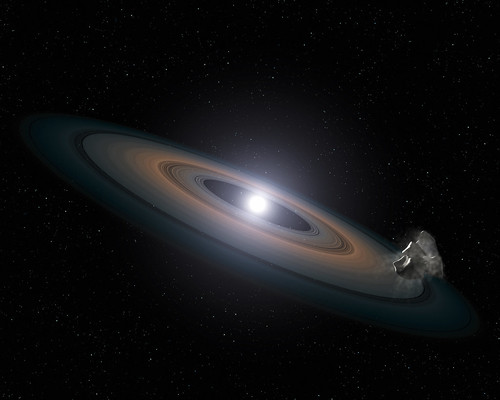 What are the dimmest stars? Before that can be answered, we need to be clear about what we mean by “dimmest.” The farther you get from a star, the dimmer it looks, so we need to eliminate the distance-from-us factor and simply measure the luminosity, or the total amount of power being given off by the star as photons (particles of light).

If we restrict ourselves to stars that are still doing fusion, then red dwarfs have the lowest luminosity. The coolest star with the lowest luminosity currently known is the red dwarf 2MASS J0523-1403. Any less luminous and we get into the realm of brown dwarfs, which aren’t stars at all.

And then there are the remains of stars: white dwarfs, neutron stars, and black holes. How dim can they be? White dwarf stars are somewhat luminous, but they cool down over time. Given enough time, they become cold lumps of carbon emitting hardly any light—they become “black dwarfs.”

It takes a very long time for white dwarfs to cool, so there are no black dwarfs yet. Astrophysicists don’t know what happens to the matter in neutron stars as they cool. By observing supernovae in other galaxies, they can estimate that several hundred million neutron stars must have formed in our galaxy, yet they only see a fraction of that.

The rest must have cooled down so much that they’re now essentially invisible. What about black holes deep in intergalactic space with nothing orbiting them? They’d still give off a tiny bit of radiation—known as Hawking radiation—but it wouldn’t be much. Such loner black holes would be the least luminous star remnants. Do they exist? Maybe.