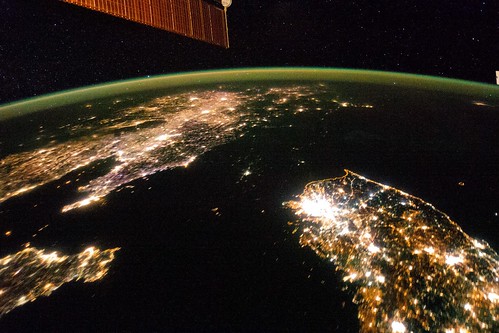 Modern civilizations have made such an impact on the globe that our political borders are visibly discernible from hundreds of miles in the air. NASA astronaut John Grunsfeld has flown on a space shuttle five times during his career.

He explained that wealthy countries are typically lined in green, while poorer countries with less access to water are a shocking brown color. Also, nations that don’t have as much widespread electricity look dim at night and stand in stark contrast to neighboring nations whose bright cities light up the sky.

This is especially evident between the borders of North and South Korea. At night, South Korea is lit up like any modern area while North Korea is so dark it virtually disappears.

In the picture above, we see South Korea illuminated vibrantly in the bottom right corner (Seoul is the brightest spot) while China is equally dazzling on the other side of the photo.

But where’s North Korea? No, it didn’t sink into the ocean; it’s actually the black mass between the lights of South Korea and China. (Also note the curvy, orange border of the DMZ.) The only visible illumination in that area is the capital city, Pyongyang.

While North Korea certainly isn’t guilty of light pollution, this image reveals how much of the country is likely living without basic electricity and all that comes with it: heat in the winter, refrigeration, and adequate hospitals.